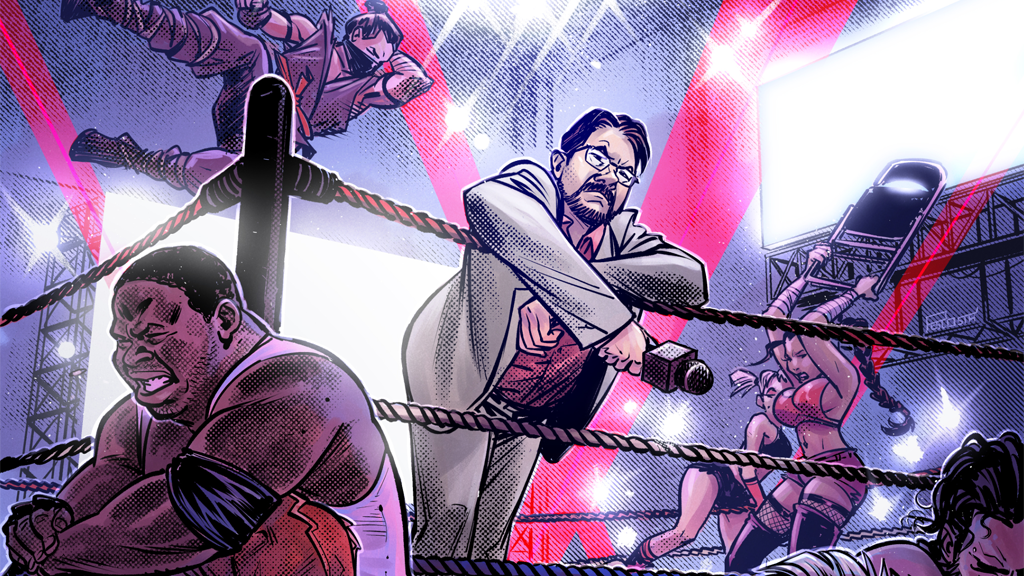 
Along with all of these free upgrades with every pledge that comes with a Kickstarter Exclusive Hardcover edition of BUTTS IN SEATS, you're also going to now get:


Stretch Goal #13 will be some metallic enhancements to the Variant Cover (because who doesn't love a little bling, right?), and then, the "ultimate" Stretch Goal after that will be the completion of "The Quest for the Gold" in which we give Tony a metallic embossed gold belt on this Variant Cover, as he will be the CHAMPION thanks to all of your support!


"What if I want both covers?"


After the campaign ends, the softcover trade paperback edition of the book that will be available in comic shops, books stores, etc. will only have this equally stunning cover by Ringo Award nominated illustrator Marianna Pescosta, which is also incredibly gorgeous:

If you're a "completest" and want to get both versions of the book with both covers (one to keep to yourself as a collectible and one as a "reader" copy that you can perhaps even share with your friends), remember that you get both the Kickstarter Exclusive Hardcover (which will now have the Variant Cover by Scott James) and the standard TPB edition (which features the "wresting chaos" cover by Marianna Pescosta) when you pledge at the "Tag Team" or "Gimme Everything" pledge levels... or, should you like, you can simply add $25 to your existing pledge. Then, at the end of the campaign, you'll have the funds on your account to add the extra TPB edition of the book into your "BackerKit" shopping card at checkout -- while also helping us unlock even more Stretch Goals in the process.


And speaking of more Stretch Goals...


"Are there going to be even more Stretch Goals past 'The Quest for the Gold,' by chance?"

Real talk, friends... we did NOT expect to unlock twelve of our fourteen planned Stretch Goals in the first TWO DAYS of the campaign.


So, to that end, I spoke with Source Point Press and Tony earlier today and -- yes, because you've demanded it (and, quite frankly, EARNED it) -- we're talking about adding a few more pretty impressive Stretch Goals that will upgrade the Kickstarter Exclusive Hardcover edition of the book even more. We've locked in one already (featuring an artist I've wanted to work with for years), and we're talking about a few more options past that... so stay tuned, everybody.


In the meantime, if you'd like to spread the word about this campaign so we can move closer and closer to unlocking them, please share this link:


Again, we are all so very, very grateful for your support of this book, friends. Truly. On behalf of myself, Tony Schiavone, Source Point Press, and the team of TWENTY-FIVE (and counting?!?) illustrators contributing to the telling of Tony's life story, thank you. Thank you, thank you, thank you. Truly!


I'll be in touch soon with that Kickstarter Exclusive Variant cover reveal... so watch this space!

ALL ROUND TWO STRETCH GOALS HAVE BEEN UNLOCKED!


Earlier today we unlocked the 10th Stretch Goal of the campaign, unleashing all the Round Two Stretch Goals! This means every Kickstarter Exclusive Hardcover now comes with:

For those of you keeping track at home, that's 28 pages of additional content that has been added to the book thanks to your support, enthusiasm, and passion for this project!


(Or, counting it another way, that means there's now 25 different amazing illustrators attached to this book telling Tony's story!)


After that, we move into unlocking an variant (and perhaps enhanced) cover, too! You're all amazing. THANK YOU!

A few of you have asked about adding extra items to your pledge levels (such as a shirt or an extra hardcover). If you would like to treat yourself to a little something extra, use this handy graphic below to determine how much to add to your existing pledge level. Then, at the end of the campaign, you'll be able to use the extra funds to add the item of your choice via the BackerKit (online shopping cart), still with FREE U.S. SHIPPING!

Remember, friends, the more people who pre-order BUTTS IN SEATS: THE TONY SCHIAVONE STORY, the more Stretch Goals we all get, so feel free to keep spreading the word across social media (and/or to your other wrestling friends) using this link:


Thanks again for your support! Truly! We all appreciate it so much... and we'll talk again soon, friends!

Seven Stretch Goals (and counting) in the first 12 hours of the campaign? THANK YOU!


Dirk Manning here! I have the distinct pleasure (and honor) of working with Tony Schiavone as the writer of BUTTS IN SEATS: THE TONY SCHIAVONE STORY, and I wanted to take a moment to say "THANK YOU!" on behalf of myself, Tony, Source Point Press, and the rest of team for your support of this project.


As I type this we have unlocked SEVEN Stretch Goal upgrades in less than the first 12 hours of the campaign, and to say that this has exceeded our wildest expectations for the first day of the campaign -- let alone the first half of the first day -- would be an major understatement. So, truly, again, from all of us... THANK YOU.


Thus far, every Kickstarter Exclusive Hardcover comes with the following FREE bonuses and upgrades as part of the Round One Stretch Goals:

We're now already in the Round Two Stretch Goals, too, which means...

After that, we move towards unlocking the Variant Cover for the Kickstarter Exclusive Hardcover (illustrated by Scott James) and, finally we could even complete the "Quest for the Gold" by getting Tony a metallic enhanced gold belt on that variant cover, too!


If you're new to Kickstarter, here's a few notes I hope you'll take a moment to read...

Once more, friends, thank you. In the time I've taken to write this update I've spoken to Tony, and he again expressed his gratitude and thanks to all of your for your support of this campaign. As you may be aware, Tony is a big comic book fan, so to be able to tell his story in such a dynamic fashion with BUTTS IN SEATS is a privilege  that he -- and we all -- most sincerely appreciate you making possible.


If you'd like to help spread the word about the campaign (so we can all get even more Stretch Goal upgrades), feel free to share the link www.ButtsInSeatsComic.com on your social media platform(s) of choice.


We appreciate you all so much and will be in touch soon! In the meantime, let's keep pushing for the "Quest for the Gold" and get Tony (and all of you) that gold belt he has earned over such an amazing career!